The Bored Apes NFT game is literally about chasing shit 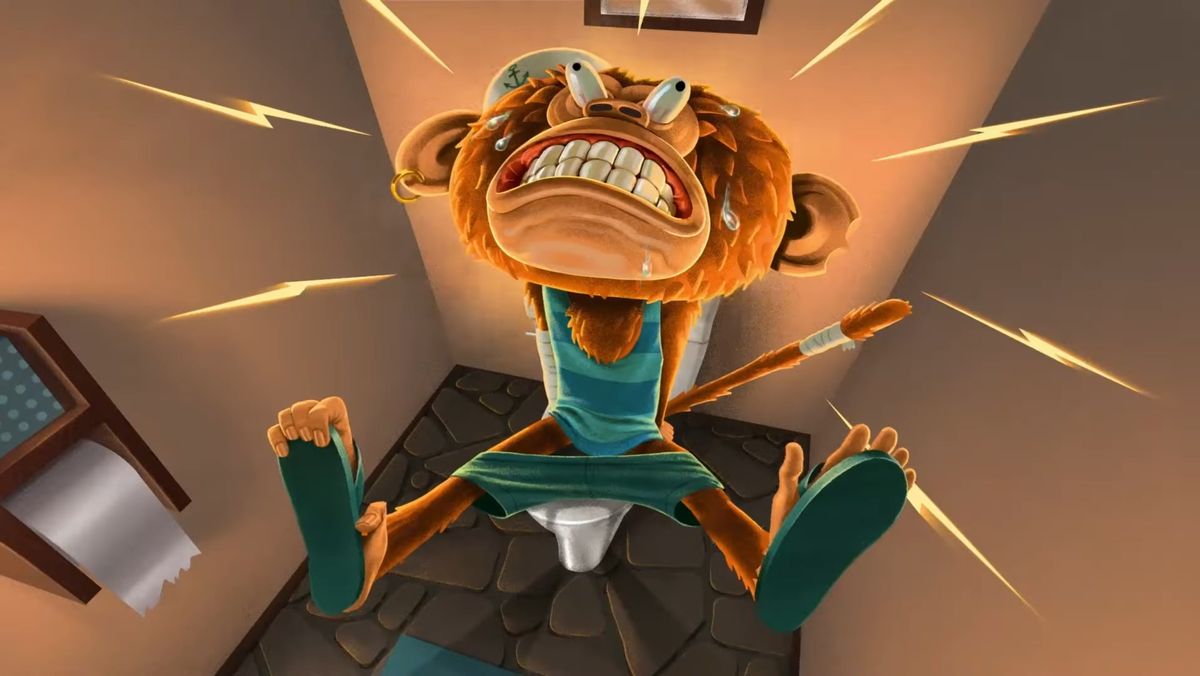 After a couple of years of successfully selling ugly scribbles of silly apes for obscene prices to people with too much money, Bored Ape Yacht Club parent company Yuga Labs is moving into game development. And it’s doing so exactly as you’d expect: Dookey Dash (opens in new tab) is a game about swimming through a sewer in pursuit of magical monkey poop.

Here’s the premise, because we might as well embrace the entirety of this ridiculousness: Jimmy, one of the Bored Apes, “took a shit so atomic he ripped a damn hole in the space-time continuum.” Out of that hole stepped an ape from different universe, who handed a box and key to another Bored Ape named Curtis. A party ensued, during which Jimmy—recovered from his earlier gastrointestinal issues, I guess—swallowed the key, leading to yet more quality time on the throne.

This is where you come in. The key has exited Jimmy and entered the sewer, and it’s up to you to take the plunge in pursuit, dodging all the detritus you might (and might not) find on a voyage through municipal plumbing while collecting powerful fragments left behind by the transdimensional rift. The longer you survive and the more you collect, the better your score—simple, right?

Not quite that simple. Access to Dookey Dash is limited to people with a “sewer pass,” which can only be claimed by owners of a Bored Ape or Mutant Ape NFT. But anyone with a pass can play, even if they don’t own one of the ape NFTs, and you can probably see where this is going: Sewer passes are being offered for sale for absolutely absurd amounts of money.

And if you think those price tags will scare people off, I have news: The total volume of sewer pass sales on Opensea at this moment stands at 13,329 ETH, which works out to nearly $21 million; the highest price paid for a single pass so far is 6.2 ETH ($9,700) for a tier 4 pass—because of course there are tiers to these things, too.

The point of all this is… well, frankly it’s unclear to me. Dookey Dash is actually billed as a “skill-based mint”: Players have until February 8 to rack up the highest score possible, at which point everyone with a sewer pass who’s played the game at least once becomes eligible for “The Summoning.”

The top score among all players gets the key that opens the box; everyone else will get a “Power Source,” which is apparently another NFT, with varying traits based on their high score.

“Your power source will be able to evolve through a sequence of various ApeCoin powered mini-games as the story continues,” the video explainer states. “These power sources are your key to what comes next.”

Okay, but what comes next? What’s in the box? What are these power sources meant to power? I don’t know. The FAQ at yuga.com (opens in new tab) isn’t super helpful on that front either, saying only that summoned power sources “can be utilized in the future mini-game sets to reach the Evo 2 stage and beyond.”

But as Ars pointed out, the utility of the power sources (which may or may not be somehow connected to the horrific Otherside metaverse platform (opens in new tab)) is almost irrelevant. It’s all about churning money: The number of sewer passes is limited, and power sources with high scores attached will be even rarer, and in the world of NFTs that grants them the appearance of value. (Players who want to sink even more money into this can also purchase powerups to aid them on their journeys through the sewers.) So far, based on the action on Opensea, Dookey Dash appears to be doing exactly what it was meant to: Turning baseless hype into money-sucking speculation.

Shiba Inu Gets Another Boost As Robinhood Launches Wallet | Bitcoinist.com