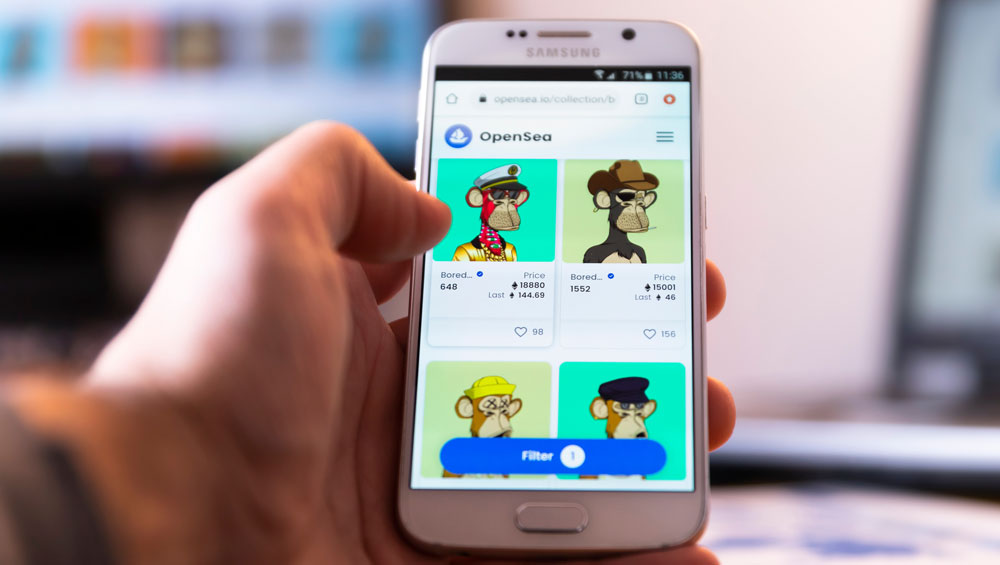 Donald Trump’s NFT collection has had a volatile short history since it launched before Christmas. The digital artwork sold out entirely for $99 a piece on Dec 15., doubled in value before collapsing. They are back  this week with sales volume surging 800%. The digital trading cards traded for $34000 on Tuesday and skyrocketed to over $300,000 on Wednesday.


According to reports, on Wednesday, Trump petitioned Facebook’s parent company Meta (META) to be allowed to reinstate his accounts after being banned in January. The former US president’s Twitter account was unblocked recently after Tesla (TSLA) CEO Elon Musk bought Twitter.

Meta had a ban that was to be in effect for two years, starting from Jan.7,  Trump’s Twitter account was unbanned on Nov. 19, 2022.

Trump has his own social media platform Truth Social with 4.8 million followers. On Twitter he has 88 million while on Facebook he has 34 million.

The digital collection was launched on the Ethereum sidechain Polygon and has Trump in various avatars.

Making digital copies is easy. Whether on a computer or on a mobile device, users can copy and paste, creating replicas with just a click of the mouse. These copies are also cheaper: When broken down, it is just simple classical economics where supply and demand determine the price. The more copies we make, the lower the price of each copy. The law applies as much to the real world as to the virtual world.

On the other hand, an original Renoir painting or a unique opera performance do not have copies and command a high price because they cannot be imitated. They are non-fungible.

So what happens when we want to make a digital object — digital art, digital awards, digital certificates — unique?

Non fungible tokens or NFTs are digital inventions that make digital creations unique. NFTs are digital certificates of authenticity. Due to the blockchain technology that underpins NFTs, ownership rights are tamper-resistant and immutably recorded on a block.

NFTs can be traded on exchanges. Trading volume and total sales for NFTs, however, have plunged with the crypto market.

Most NFTs today run on the Ethereum blockchain and have the programmable features of smart contracts. Since NFTs are tokens generated digitally, they can be used to secure ownership of both tangible and intangible items. Besides artwork, collectibles, and real estate, NFTs can also be generated for tweets and several other kinds of internet content.

NFTs are already a new venture for top streaming content players Walt Disney (DIS) and Netflix (NFLX). These leaders know that their premium content alone is not enough. They have had to reinvent themselves time and again to lure viewers and keep the lead.

On Netflix or Disney, NFTs would allow content creators to continue to own digital rights to the content being streamed. This could lead to authors offering their content independently without a curating intermediary. Viewers may also be able to sell their opinion of a program in a tweet and make it an NFT as well.

But equally importantly, NFTs may be a new way of getting viewers by letting them say how much they liked a show. For the third season of “Love, Death and Robots,” Netflix launched an NFT scavenger hunt on OpenSea. The NFTs sell for a fraction of one ETH so are not pricey.

But the relative price of each NFT sale will show how much viewers liked it compared with other Netflix shows. That kind of data can help the streaming giant gauge viewers’ likes and dislikes and curate their content more effectively.

Disney has also partnered with VeVe Digital Collectibles for its NFT collectibles. But it has also chosen crypto firm Polygon to explore a theme park metaverse for “next generation storytelling.”

NFT adoption will likely grow, though right now NFT sales volume is low. Top NFTs such as CryptoPunks and Xmon may still command a huge price. But NFTs as a whole are yet to regain the momentum they had in 2021. However, as companies see new ways of using NFTs, the interest will likely go up, making them good buys.

What Is CAN SLIM? If You Want To Find Winning Stocks, Better Know It

IBD Live: Learn And Analyze Growth Stocks With The Pros

Looking For The Next Big Stock Market Winners? Start With These 3 Steps

Crypto Markets Today: Bitcoin Surges Above $22K, Genesis Has Over $5B in Liabilities

Why A Sudden Crypto Price Surge Has Added $200 Billion To Bitcoin, Ethereum, BNB, XRP, Cardano, Dogecoin, Polygon And Solana In 2023