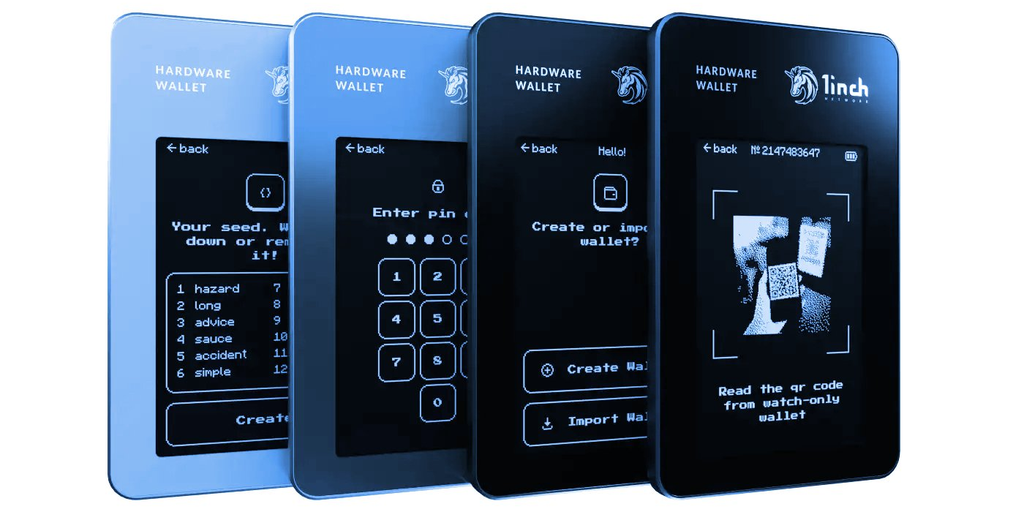 Popular decentralized exchange (DEX) aggregator 1inch Network is expanding its ecosystem of products and projects with the launch of its own multi-coin hardware wallet.

Supported by a grant from the 1inch Foundation, the crypto wallet is in its final stages of development, with sales expected to start later this year.

Hardware wallets, also known as cold storage, come as physical devices and are considered the best option for securing cryptocurrencies as they keep users’ private keys in a secure offline environment, safe from potential online attacks and intrusions.

As a DEX aggregator that identifies the best trade for a specific pair, 1inch Network provides a place to swap tokens on the Ethereum (ERC-20), BNB Chain (BEP-20), Avalanche, Fantom, and Polygon networks, among others.

Similar to what the existing 1inch Wallet offers, the hardware crypto wallet will support the same set of coins, with more chains to be gradually added in the future, the team behind the project told Decrypt.

Though users can create new wallets using the Hierarchical Deterministic (HD) Wallet algorithm, which is in accordance with Bitcoin Improvement Proposal (BIP) 44, the wallet doesn’t currently support Bitcoin. BIP-44 was a proposal co-authored by Marek Palatinus and Pavol Rusnak, the creators of the Trezor hardware wallet, that was originally designed to safely hold the world’s largest cryptocurrency.

“In fact, we call it the first DeFi hardware wallet, that’s why I believe BTC is outside the scope, however, WBTC will be supported,” Alexey Devyatkin, founder of the 1inch hardware wallet told Decrypt, referring to the Ethereum-compatible version of Bitcoin called Wrapped Bitcoin (WBTC).

What separates the 1inch offering from other hardware wallets on the market is that it supports multiple seed phrases—a sequence of random words that stores the data required to access or recover crypto assets stored in the wallet.

According to 1inch, this solves the problem of one device supporting only one unique seed phrase. Compromising this one seed phrase would also compromise all the existing wallets (no matter BTC, ETH, or any other), hence the need for multiple seed phrases.

The wallet’s users can also take advantage of transparent transaction signing, as opposed to blind signing offered by some other devices. Blind signing lets users confirm a smart contract interaction they don’t have full transparency over, and as such is considered as high risk, especially in the often complex world of decentralized finance (DeFi).

Additionally, to prevent hacks and theft, the wallet executes full transaction parsing and offline call data analysis, immediately warning the user if a transaction has been compromised.

“In case of an attacker asking you to show wallets, you can enter a pin code for only one wallet with no money. They will never know how many other wallets you have,” Devyatkin told Decrypt.

When it comes to design aspects, the 1inch hardware wallet is roughly the size of a bank card, weighing just 70 grams and 4 millimeters thin. The device is fully air-gapped, as it has no buttons, and does not require any wired connection, while all data is exchanged using QR codes or with NFC.