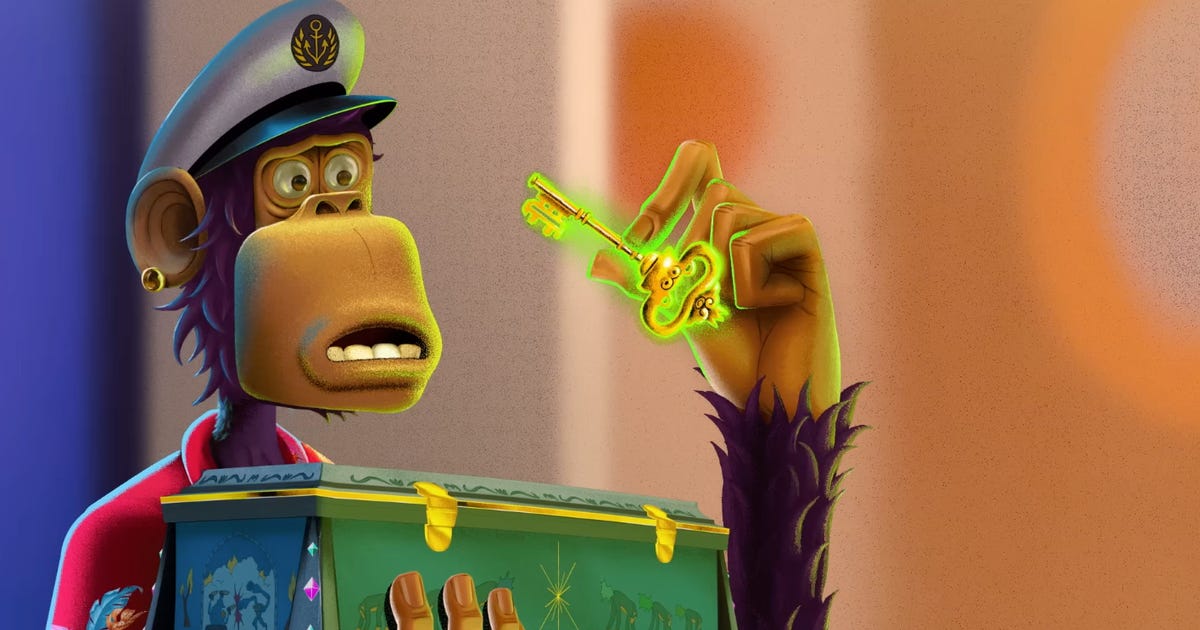 The last six months have been quiet on the nonfungible front, and you don’t need to consult sales data to know it. Two of the most traded new NFT sets over the past month were Donald Trump’s painfully bad “digital trading cards” and a collection consisting of 10,000 pairs of pixelated feet. Crypto and NFT speculators have evidently been itching for something, anything to trade.

The Bored Ape Yacht Club is here to scratch that itch. Yuga Labs, the company behind the polarizing NFT collection, is on the cusp of launching a new collection. The initial BAYC collection helped launch the big NFT bubble; now we’ll see how powerful the brand is after the pop.

It’s an experiment on integrating narrative and gaming into NFTs. Outside of that, little is known about the upcoming drop. Yuga Labs is keeping it mysterious, an apparent attempt at the ol’ “under promise, over deliver” strategy.

First, the story. It follows Jimmy the Monkey, who in a surprisingly cinematic trailer accidentally opens the spacetime continuum by ripping “an atomic shit” during a party at the yacht club. Out of this portal a mysterious figure appears, presenting an ornate box and a key to open it. Malarkey ensues, and Jimmy ends up accidentally drinking the key. He locks himself in the bathroom and tries to excrete it out, but it gets stuck. That’s where the game comes in: Dookey Dash, playable on Jan. 19 for three weeks, has you as a Bored Ape racing through the sewers to uncork Jimmy from below.

In short, a $4 billion startup is doing an NFT drop around a monkey’s butthole.

Dookey Dash is an endless runner game where you play until you lose. The longer you last, the more points you get. Players will find out what those points are good for on Feb. 15, when there will be a storyline “summoning.” A Yuga Labs explainer indicates this will lead to yet more mini games and more story.

This all may be a public experiment, but it’s not an experiment for the public. You’ll need a Sewer Pass to participate, and there are only two ways to get one. Sewer Passes are being given to owners of Mutant Ape and Bored Ape Yacht Club NFTs for free. These holders can then choose to sell the Pass if they choose to, though they’ll surely be asking for thousands of dollars.

If you’re not into NFTs, you’re probably shaking your head, blood pressure slightly raised. But unlike Otherside, Yuga Labs’ upcoming MMORPG, the Trial of Jimmy the Monkey isn’t for public consumption. It’s more NFTs for NFT traders to trade. And it’s almost assured that Yuga will generate millions of dollars, if not tens of millions.

It would be poetic if Yuga were to revitalize the market. The peak of NFTs came in May when Yuga released land deed NFTs for the aforementioned Otherside game, which hit $1 billion in trading volumes over just a few days. That was the last hurrah for NFTs in 2022, and Yuga surely hopes that The Trial of Jimmy the Monkey will be the first of many NFT hurrahs for 2023.

That’s unlikely, however, considering how closely cryptocurrency prices appear tied to the economy. The Federal Reserve’s attempt to battle inflation by raising interest rates has done great damage to speculative assets of all kinds. Meta is down over 50% compared with this time last year, Google’s Alphabet has declined 33% and Tesla has fallen 64%. With many economists predicting a recession in 2023, cryptocurrency and NFTs are unlikely to recover to 2022 heights anytime soon.

But NFT traders can in the meantime busy themselves with Jimmy the Monkey. Say what you will of him; his plight is at least more authentic than Trump’s digital trading cards.

Crypto stocks surge: Coinbase up 69%, MicroStrategy up 74% since lows